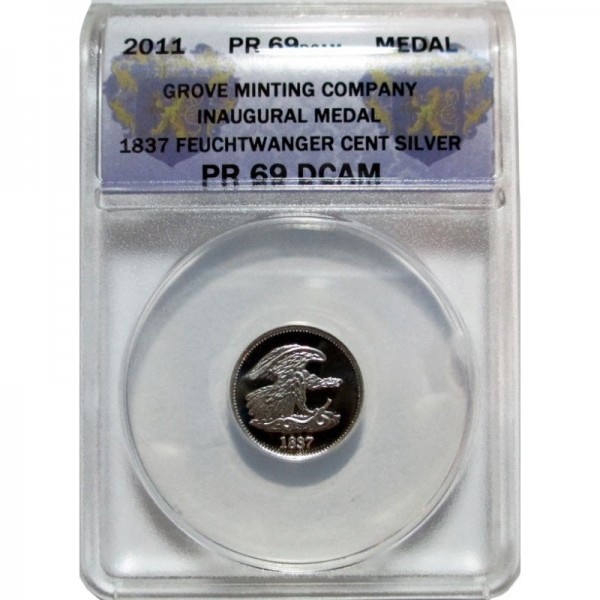 2011 Silver Commemorative of the 1837 Feuchtwanger Cent. This commemorative is Proof Struck in solid .999 Silver, weighing 1/10 a Troy Ounce at 18mm wide (about the size of a US Dime).

The Inaugural Release of the Grove Minting Company!

2011 Silver Commemorative of the 1837 Feuchtwanger Cent. This commemorative is Proof Struck in solid .999 Silver, weighing 1/10 a Troy Ounce at 18mm wide (about the size of a US Dime).

The production of the Feuchtwanger Cent Commemorative was limited to a striking of 1000 pieces.

This is the first and only Commemorative Feuchtwanger collectible worldwide.

The history behind our commemorative token.

Lewis Feuchtwanger (Born in Furth, Bavaria on January 11, 1805) received a doctorate at the University of Jena and then moved to New York City. He was primarily a mineralogist, metallurgist, and chemist, but also worked as a physician and was a member of a number of learned societies. He wrote four books on mineralogy and chemicals.

In 1837, to alleviate the need for small change during the Hard Times, Feuchtwanger created tokens made of argentan (commonly known as German Silver), an alloy made of copper, nickel, zinc, tin and trace metals. It was considerably cheaper to produce than the extraction of copper for the government minted half-cents and cents.

The Hard Times, an especially rough period of economic recession following the dissolution of the Second Bank of the United States, was known for massive hoarding of small change. Much of the small change circulating at this time (roughly 1837-1844) was composed of clunky copper half-cents and cents privately produced or various cut and whole silver coins of foreign origin. In fact, it would not be until 1857, that Congress would enact into law that legal currency be coin of United States Mint origin.

In 1837, Feuchtwanger presented his one cent coins to Congress for approval as legal coinage. This was probably the first attempt to circulate "nickel" coinage in the United States. Congress denied his request, but Feuchtwanger persisted in his production and circulation. Laws banning private coinage were not passed until 1864. Between 1837 and 1844 thousands of Feuchtwanger cents came out of his New York City pharmacy. To the discerning collector over a dozen different die casts have been identified, affecting the relative rarity of each specimen found.

Aside from one cent tokens, in 1864 Feuchtwanger also produced three cent tokens which are considered extremely rare, as few specimens have survived. Feuchtwanger was also noted for producing stamp-like casts featuring his common theme of a pouncing eagle attacking a snake.

7 other products in the same category:

2013 Commemorative of the 1877 Helmeted Liberty Half Dollar, Certified PR69 DCAM by ANACS. Currently out of stock.

2012 Commemorative of the 1854 Flying Eagle Pattern Cent, Certified by ICG. Currently out of stock.

2013 Commemorative of the 1877 Helmeted Liberty Half Dollar, Certified DCAM by ICG. Currently out of stock. 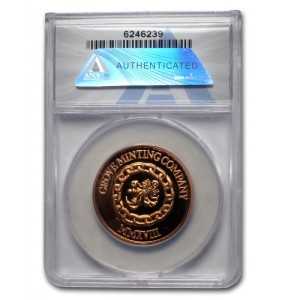 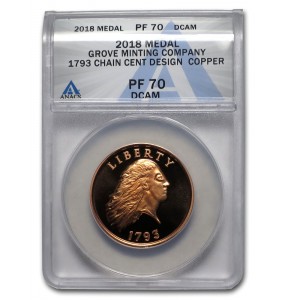 Celebrating the 225th anniversary of the 1793 Chain Cent. Celebrating its 2018 release, the Grove Minting Company pays homage to Henry Voigt, Chief Engraver of the first United States Mint, as a...

Pictured is the 2015 Grove Minting Golden Thaler, certified PR 69 DCAM by ANACS. This proof design is struck as a 48 Schilling from the 1700's but with modern manufacturing techniques, showcasing a...