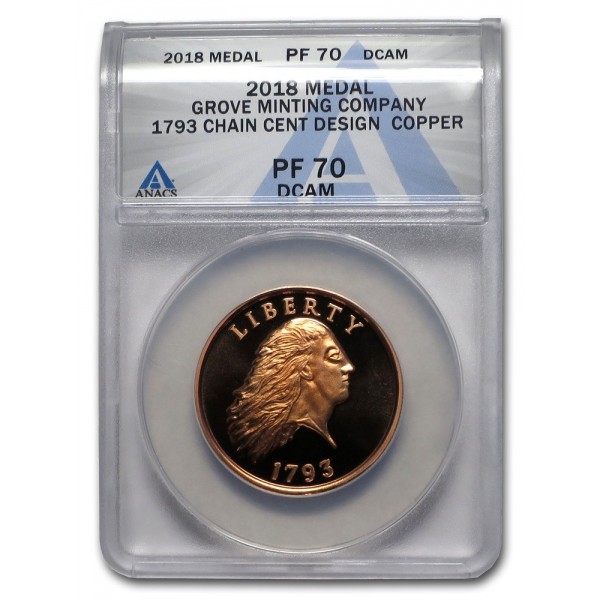 The Grove Minting Company commemorates the 225th anniversary of 1793 to one of the first United States coins, the Chain Cent. This Flowing Hair Liberty Head Obverse / Chain Reverse features a Liberty Head and motto, with the classic chain surrounding the Grove Minting Crest; the Lion & Anchor.

Celebrating the 225th anniversary of the 1793 Chain Cent.

This commemorative is based upon the exceedingly rare 1793 Chain Cent, of who's original designer is unknown, which showcases an obverse Liberty facing right with motto and date. The original chain cents were struck during late February and early March 1793, with records indicating that approximately 36,103 having been produced. However, the public reaction to the coins was somewhat controversial. The reverse's central design figure, for which the coin is named, is an interlocking chain with 15 links, symbolizing unity through strength of the 15 American states in existence at that time, now surrounding the Grove Minting Crest; the Lion & Anchor.

The commemorative is proof-struck in copper at 30mm wide, with a reeded edge.

7 other products in the same category: 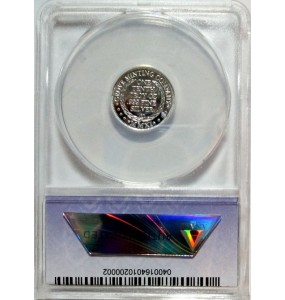 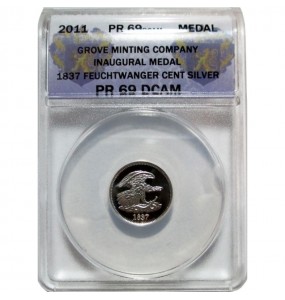 2012 Commemorative of the 1854 Flying Eagle Pattern Cent, Certified by ICG. Currently out of stock.

2013 Commemorative of the 1877 Helmeted Liberty Half Dollar, Certified DCAM by ICG. Currently out of stock.

2013 Commemorative of the 1877 Helmeted Liberty Half Dollar, Certified PR69 DCAM by ANACS. Currently out of stock.

Pictured is the 2015 Grove Minting Golden Thaler, certified PR 69 DCAM by ANACS. This proof design is struck as a 48 Schilling from the 1700's but with modern manufacturing techniques, showcasing a...