Pattern Judd-271 at 27mm. Judd 271 is unusual in that the diameter is the same as a $10 gold piece, but to keep the weight the same as a regular $5 gold piece, the planchet was rolled out much thinner than normal. Another unusual aspect of Judd 271 is that the V in FIVE is actually an inverted A. Judd 271 is represented by only two examples, both of which (amazingly, but not surprisingly) were once owned by Dr. Wilkison. The good doctor acquired his first example in the early 1940's from Abe Kosoff for $4,200. In 1962, Dr. Wilkison traded for Dr. Judd's collection of gold patterns, which included a second (and better) Judd-271. Wilkison retained both examples, presumably keeping the first one as potential trade bait. Narrative by Ron Guth, photo credit pcgs.com

Due to Covid-19, operations temporarily suspended in the State of Pennsylvania.

Website updates, classic US and World coins to be added to catalog for sale.

Wishing everyone a safe and enjoyable holiday and New Year!

New product announcement, our next release is scheduled for the fist week of September, 2017.

All Nickel and Silver varieties of the 2017 Frank Gasparro 1977 Pattern Liberty Dollar commemorative have sold, with total mintage limit reached.

2017 commemorative design production has been slightly delayed, release is scheduled for the 2nd week of February.

2017 commemorative design production begins. Design will be unveiled in January!

Grove Minting Coin Identification Network proof-of-concept successful for coin type identification. Site http://groveminting.centralus.cloudapp.azure.com/ still needs work and the beta release has been delayed until Q1 of 2017. ImageClient application has been built for client use, and the underlying framework is set. I'm still working through the coding to make this production ready. I'm only one developer and hope to dedicate more time to this during the fall and winter, and look forward to showing you my work.

Exploration of possible blockchain and crypto-currency market for purchase of Grove Minting commemoratives, implementation yet to be determined.

Grove Minting Coin Identification Network registration site launched. Beta testing will commence in the latter half of Q3 2016. Visitors are encouraged to register at the following site: http://groveminting.centralus.cloudapp.azure.com/

Business partnerships are explored to commoditize and bring to market the Grove Minting coin identification algorithm.

The 2016 Silver Saint George Dragonslayer is now available for purchase. Our 2016 design will be a 1 ounce .999 silver commemorative, in continuation of the Thaler series. Sculpt of the Obverse and Reverse begins.

Grove Minting Company continues its push across State legislature urging the State to maintain the bullion and rare coin sales tax exemption. Over a dozen Senators and House Representitives were contacted regarding this important proposal.

Initial designs for 2016 issue are considered and refined.

Grove Minting Company reaches out to State legislature urging the State to maintain the bullion and rare coin sales tax exemption, which is currently under threat from the Governors newest budget proposal. 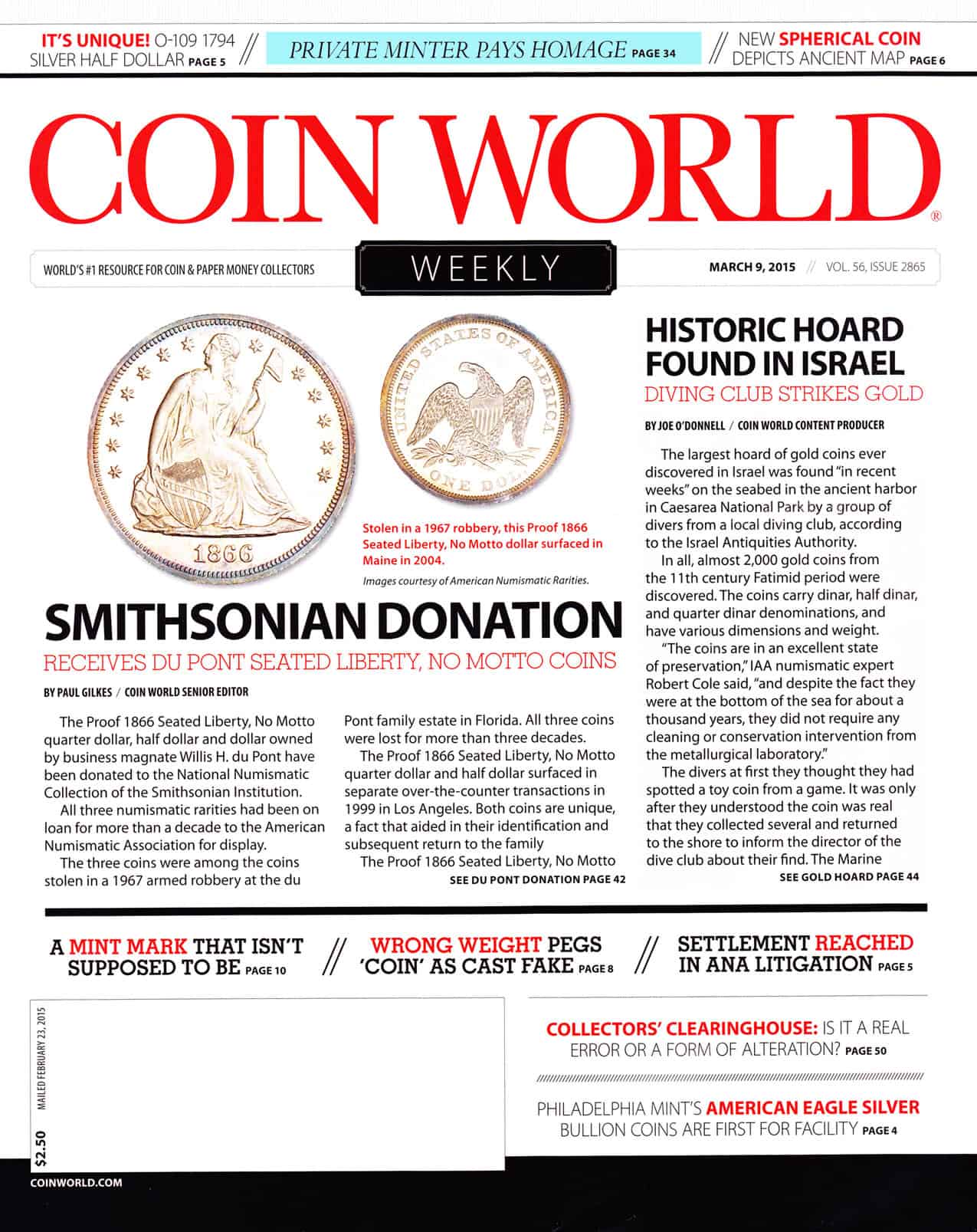 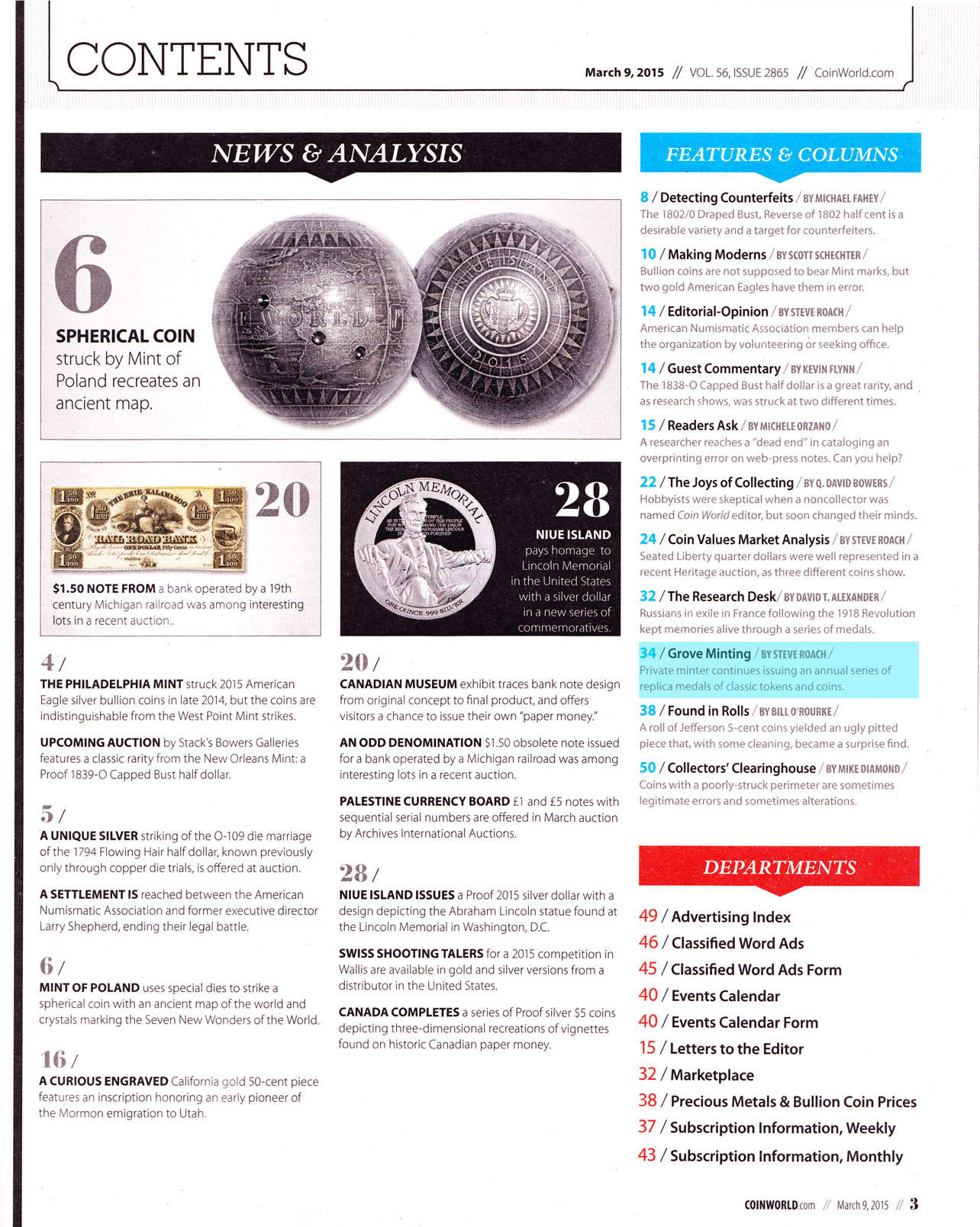 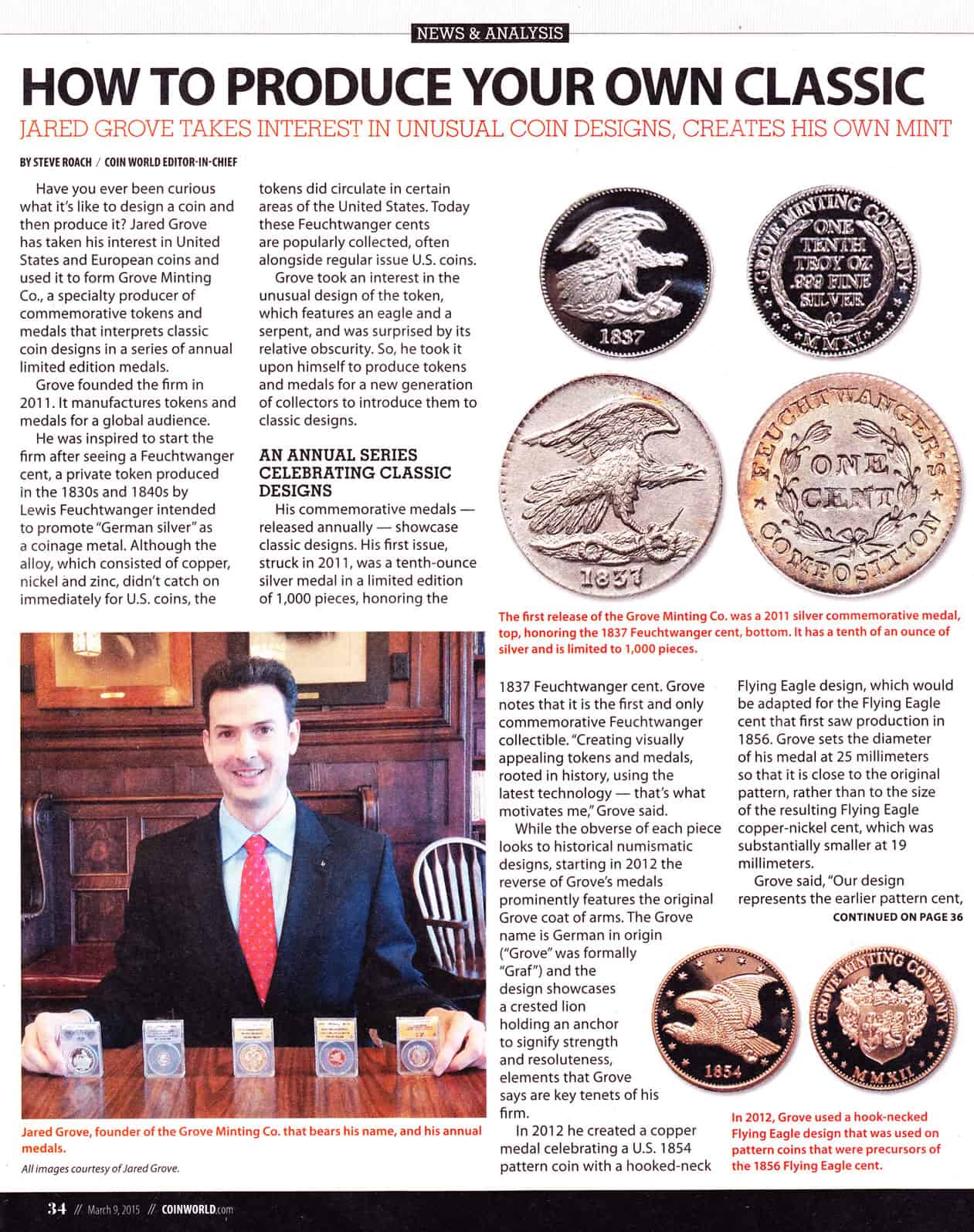 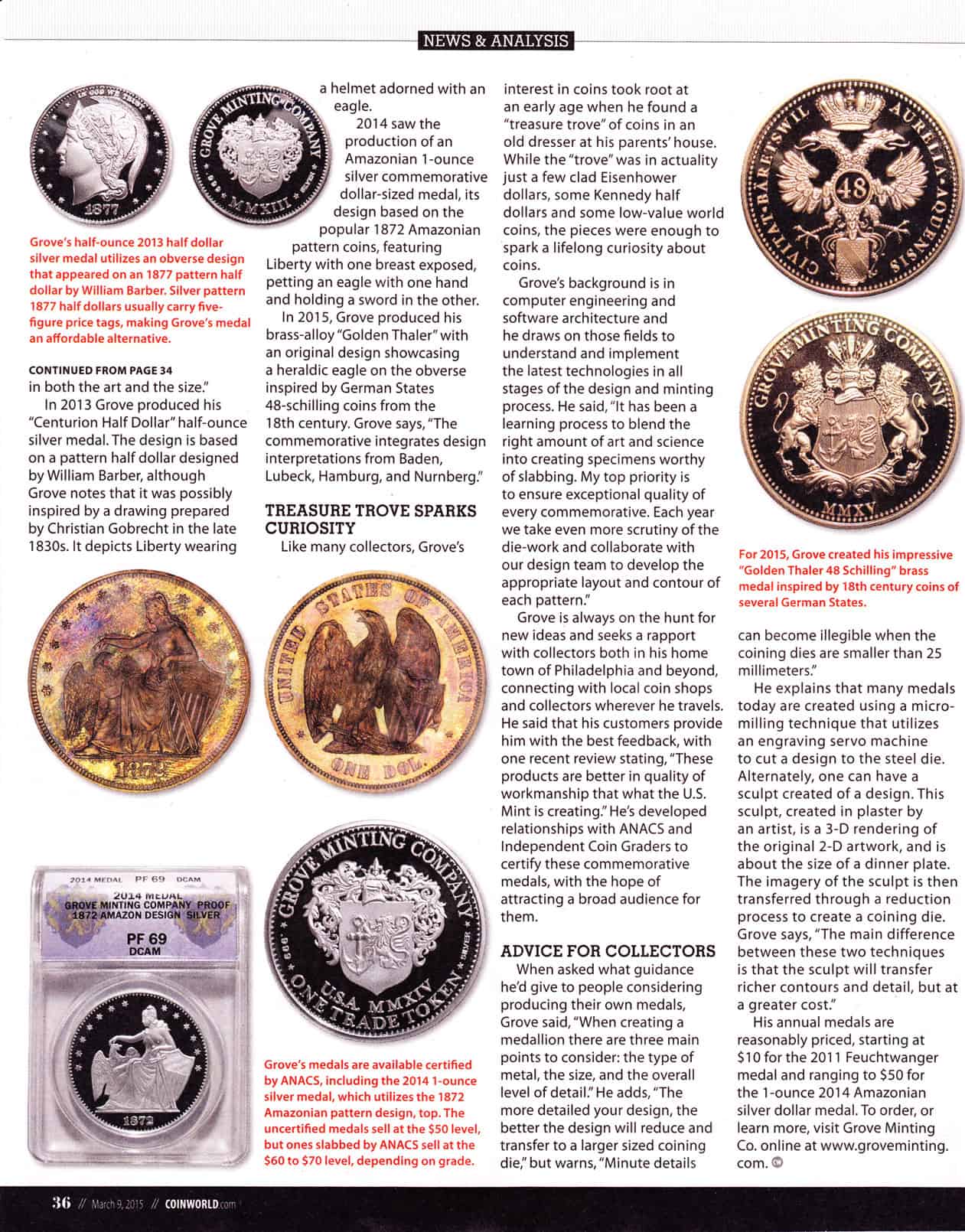 When visiting the bank I still ask for a few rolls of Lincoln cents when making my transactions. Cherry-picking for cents by the community at large has yielded some impressive results, and as we enter 2015, even cents from the 70's and 80's might start to gain in value. I'd like to speculate that finding 95% copper cents in a roll will soon be the new treasure hunt as most scarce coins have already been removed from general circulation.

I came up with a quick formula to determine how many 95% copper cents are in a roll, without even opening up the roll itself.

Weigh the individual roll using a jewelry scale, set to grams. Take that number and subtract 126. Then divide that number by 0.61. The sum will be the number of 95% copper coins in that roll!

Here is the reasoning behind the formula using what we know:
A single 95% copper cent weighs 3.11 grams.
A single newer type copper-plated zinc cent weighs 2.5 grams.
We will assume the paper used to wrap the roll weighs 1 gram.

There should be 11 total 95% copper coins in this roll, and sure enough, that's what I find!

As a side note, this formula doesn't account for a roll which might contain 1943 steel cents, and if cents have worn a bit due to circulation, in that case you can round up to determine the final number. On the odd chance you find a roll which weighs more than 156.5 grams, you might have struck silver or gold.

The 2015 Grove Minting Golden Thaler was highlighted in the September 16th issue of Numismatic News. 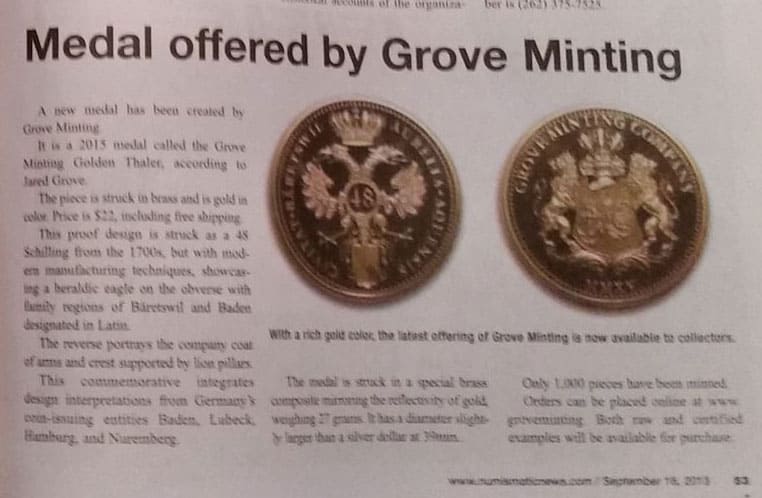 Grove Minting becomes a recognized BBB entity with an A- rating.

The 2015 Golden Thaler 48 Schilling Commemorative is now online for viewing, and will be auctioned on ebay in the following weeks. Auctions can be viewed at the Grove Minting ebay page.

The 2011 Inagural Feuchtwanger Commemorative is getting a special slabbing and certification through ANACS, available for purchase mid month.

New products have been added to the site, including domestic Silver Dollars and early European Thalers. A few scarce pieces have been made available for purchase.

Grove Minting Company is proud to be a corporate supporter of US Patriot Sailing.

Their site is linked here: Early design ideas for our next commemorative. This one is going to be quite unique! Grove Minting finilized the production for its 2014 Commemorative, which will be featured in an upcoming issue of Numismatic News in October.

Grove Minting Commemorative tokens can now be slabbed and certified by ANACS.

There is a story behind the origin of every coin. For most coin collectors, the physical design of a coin is just as important as its visual appeal. Considering the intricate differences between the many coin designs throughout US history, one can't help but wonder how these designs were first envisioned and proposed.

The creation of any coin first starts with a pattern, commonly referred to as a prototype in other industries. These patterns become the groundwork towards the production of a final design. Coins throughout US history have had a handful to dozens of patterns attributed to the formation of their final design. Acquiring a pattern can be just as fulfilling as finding a rare date/mintmark, as patterns are both scarce and unique. One of my favorite patterns is that of the Flying Eagle Cent. The obverse hook-necked flying eagle surrounded by thirteen stars is both a simple and symbolic design, which was first seen on the Gobrecht Dollar and inspired from a drawing by Titian Peale.

The Flying Eagle Cent was produced from 1856 through 1858, a short span of only three years. What is not commonly known is that the Flying Eagle Cent was also struck in 1854 and 1855 as a pattern. The Flying Eagle pattern was also the size of a large cent, similar to the Braided Hair predecessor, and was the last large cent proposed before the adoption of the smaller cent design. This fact in itself makes this coin very desirable. Not only was there a design change, but also a change in the size of the coin. All other common denominations of US coins have maintained their original size throughout history, except for the Flying Eagle. However, owning an original 1854 or 1855 Flying Eagle pattern is out of reach for many, as a prime example will cost thousands of dollars.

Many collectors seek out commemorative tokens as a way to supplement rare designs to their collection.

The collections at Grove Minting Company are specialized designs of commemorative tokens, released annually, showcasing popular US patterns which include gems like the aforementioned 1854 Flying Eagle. These modern commemoratives of early US patterns are pristine in their original detail, and a tribute to a time when our coins were not only art, but also solid precious metal.

Many of the candidate designs at the Grove Minting Company were chosen after researching examples as illustrated from the Society of U.S. Pattern Collectors library. This is a fantastic resource for investigating and exploring those very exclusive coins which have been created during our nation's history.

Wishing you good fortune in the discovery of unique additions to your collection. God Bless America. 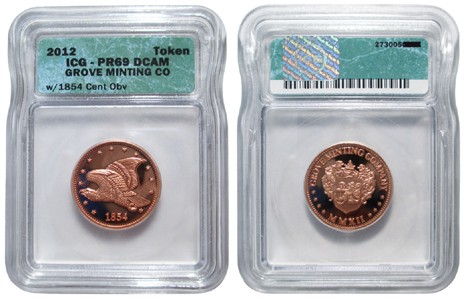 Candidate designs are being finalized for the 2014 commemorative.

Announcement of 2013 Centurion Half Dollar to be released in the early Spring.